A bright future is predicted for new Wales back row find Taine Basham.

Dynamic displays against New Zealand, South Africa, Fiji and Australia propelled the 22-year-old from a promising young Welsh prospect onto the international stage.

Basham was the only Welsh player to feature in every minute of the autumn campaign and topped this off with a man-of-the-match display in their dramatic win against the Wallabies.

Now he has also tied down his future by signing a span data-reactid=".vv0hdm5ghw.0.0.0.1.$paragraph-4.$link-2.0"">>long-term contract with the Dragons, whose director of rugby Dean Ryan has been watching his progress over the last month with interest.

"It has been a result of probably 24 months of hard work by Taine and we are all delighted to see that form transfer onto the international field," said Ryan.

"I don't think anybody has been in doubt about the moments Taine can create. My challenge to him is always about building foundations to allow him to play international rugby and create those moments.

"He is a young man who is just starting out on his journey.

"The experiences he has had over the last three or four weeks will be fantastic for him to apply back into games we are playing and hopefully he gets the chance to be better again on the international scene."

Ryan admits Basham has developed from this raw talents into a more complete back rower.

"I can remember the first time I gave him a rollicking," added Ryan.

"It was against Castres in Europe at home. He had scored three tries and looked at me as if I was mad and he was completely bewildered.

"It was a great capture of him thinking he played well because he had scored three tries and me thinking he had no foundations to his game and we were in danger of getting stuffed.

"It was about how you build good games and not sit waiting for moments. I don't think he got it that day and went away confused.

"I know he can score tries and do things other people can't. What I didn't know is whether the game will allow him to do it all the time and whether he needs to build other aspects, especially going up to international level.

"That was 18 months ago and credit to him he sees games differently.

"I was just trying to give him a different lens on what good games look like because there was a danger as with all young players, they have been celebrated, promoted and recognised in the past.

"I did not want him to lose any of his talents, but I wanted him to build and work hard at the things underneath.

"He has worked constantly to ensure he is always in the game and that's why I am delighted for him to achieve what he has over the last four or five weeks." 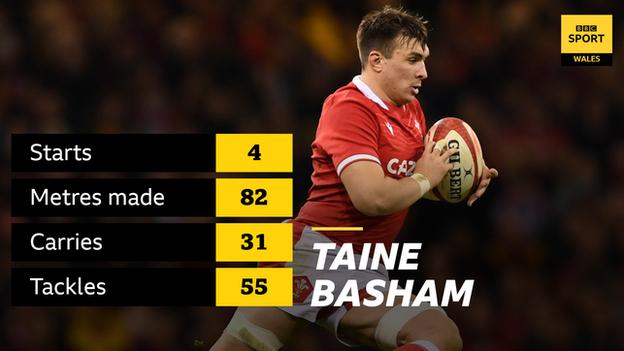 "It's an ask for anybody to go the full 80 minutes four times," added Ryan.

"I always knew he could have those moments in games, irrespective of what is happening, and that is probably what separates him from other people."

The comedown of returning to regional rugby is what Basham faces next.

"We have all got to be conscious of what the impact will be," added Ryan.

"We are keen to get Taine back playing and also get him a rest somewhere.

"Playing four full games against some of the best sides in the world is going to have its toll emotionally and physically.

"I chatted to him about the challenge of playing in front of 70,000 people and coming back to club rugby.

"It is something I have seen many people fall foul of in terms of not priming themselves for the difference.

"The challenge for him is keep working and doing the things he has been doing.

"My challenge is to manage him now that he has become an international player and how I help get the best out of him for both club and country."

Taine Basham: Wales and Dragons flanker at start of his journey

Read Taine Basham: Wales and Dragons flanker at start of his journey by BBC

Read Taine Bashams rollicking and the lightbulb moment that set Dragons flanker on the road to Wales stardom by Wales Online on MSN.com

Read Springboks to end Cardiff hoodoo against Wales by MSN

The key talking points as Wales close their season against Australia

No comments to show.